The Office of Sustainability’s blog has MOVED to our new website. See you on the other side!

The City of Philadelphia and the Philadelphia Energy Authority (PEA) have jointly signed on to a federal program aimed at lowering energy bills in low-income communities through energy efficiency and renewable energy projects.

The City and PEA will take part in the Clean Energy for Low Income Communities Accelerator, a program of the U.S. Department of Energy (DOE).  By signing on to the Accelerator, the City and the PEA are committing to working with DOE to identify barriers to clean energy projects, to demonstrating successful approaches to increasing energy efficiency and renewable energy access, and to sharing resources and other information with partners.

“It’s clear that investing in energy efficiency is a smart way to save money and reduce greenhouse gas emissions. By working with the U.S. Department of Energy and the Philadelphia Energy Authority to target low-income households for clean energy projects, Philadelphia can also help to reduce the burden of high energy bills and create local jobs,” said Christine Knapp, Director of the Office of Sustainability.

Through Greenworks, the City’s sustainability framework, the Office of Sustainability leads a variety of energy management programs, such as the retrofit of the City’s four largest downtown buildings which is saving $1.4 million annually.

The Accelerator is an off-shoot of DOE’s Better Buildings Initiative which Philadelphia has participated in since 2011. Through that partnership, the City has worked with businesses and non-profit organizations to implement programs that reduce energy consumption in buildings, which are Philadelphia’s largest source of greenhouse gas emissions. 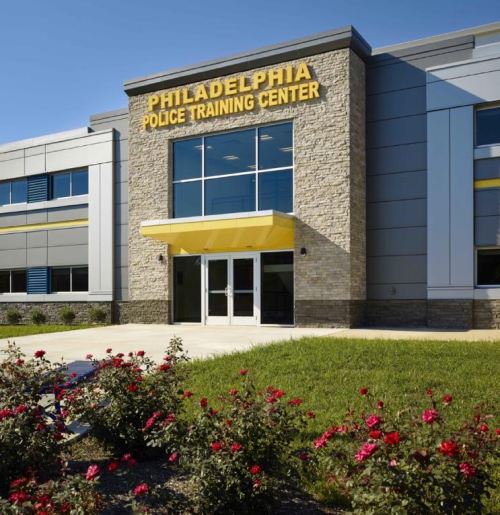 The 78,000 sq.ft. building at 2838 Woodhaven Road was an $18 million renovation completed by the Department of Public Property. The state-of-the-art facility centralizes some of the police force’s key units, including the Training and Education Services Bureau, Advance Training Unit, and the Standards and Accountability Bureau.

Last week, the Philadelphia Prisons System was recognized by the U.S. Environmental Protection Agency for its innovative food recovery program. The City was among more than 800 governments, businesses, and organizations nationwide that participated in the 2015 EPA’s Food Recovery Challenge.

The Philadelphia Prisons System composts 1.35 tons of food waste each day, saving $31,000 annually in landfill fees. Along with the composting, the Prison System’s food recovery program provides inmates with hands-on job training in horticulture and urban gardening onsite at the Orchard Program located on property behind Philadelphia Industrial Correction Center on State Street.

The City was among more than 800 governments, businesses and organizations nationwide that participated in the 2015 EPA’s Food Recovery Challenge. 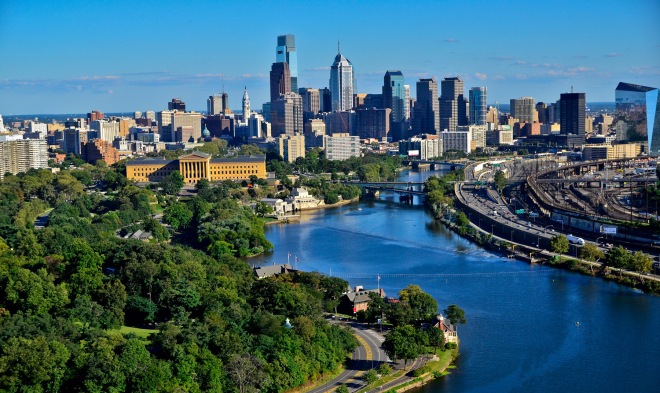 Spring is finally here, and that means Earth Day is right around the corner, along with all the activities that seem to span the whole month of April. In coordination with Earth Month celebrations, the Office of Sustainability will be kicking off a series of public engagement opportunities designed to solicit your feedback on the next generation of Greenworks. We want to hear from issue experts, students, businesses, faith institutions, and residents from all communities to help us set new goals and initiatives to meet them.

You can make your voice heard in any of the following ways:

Please RSVP or indicate your interest in attending one of the soon to be scheduled sessions.

We look forward to hearing from you during this exciting time. Happy Earth Month! 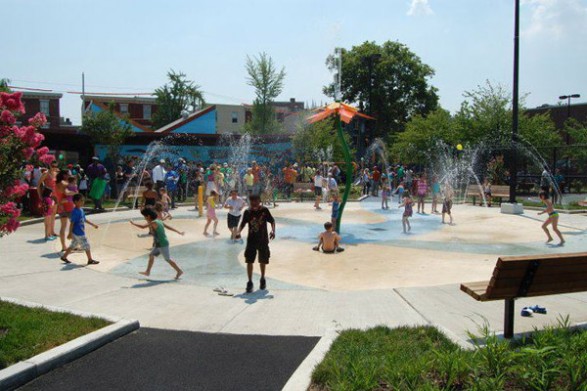 The temperatures in the high 70s this week are a reminder that summer will be here before you know it. And with warmer weather comes the constant hum of air conditioning. Have you ever come home from work on a sweltering July day and turned up your AC or fans just to cool down?

Well, you’re not alone. And for our regional electricity grid, all those residents switching on their air conditioning means high demand for energy during the hottest part of the afternoon. To help offset this demand, large property owners including the City of Philadelphia participate in a load management program.

Here’s how it works: When the grid is stressed by high demand, building operators in City-owned facilities reduce the energy consumed in those buildings. By turning up our thermostats a few degrees and cycling certain building equipment off and on, the City helps to avoid brown-outs, blackouts, and can prevent equipment damage.

Even better, participating in this program generates revenue. Over the past five years, the City has earned nearly $2 million dollars through our regional grid operator PJM’s emergency demand response program. Through its other load management programs, the City has avoided millions more in energy costs. Not bad for a few hours’ work.

With recent legal clarity around a few of the more critical programs, the City is now looking toward the future of load management, and is seeking a new vendor to help coordinate this program. 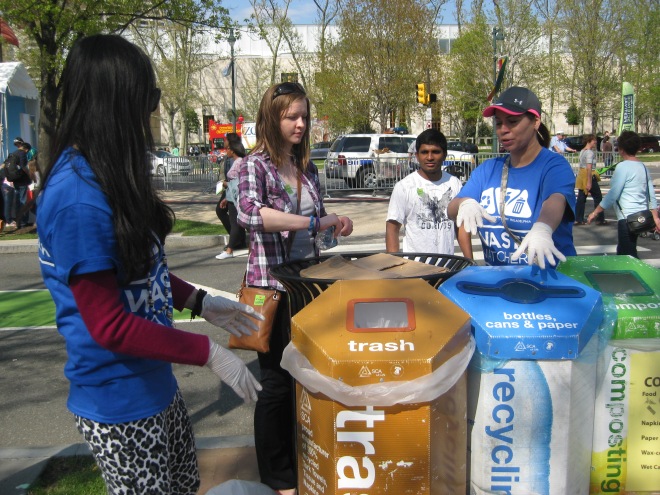 If you’ve experienced the Philadelphia Marathon in the past few years, either as a participant or spectator, you probably think first of the crowds: one of the largest marathons in the country, the Philadelphia Marathon draws nearly 100,000 people each year. But with all those people comes a lot of waste: thousands of pounds of water bottles, banana peels, and energy bar wrappers.

For the past four years, the Philadelphia Marathon has worked with Waste Watchers, a partnership between the Office of Sustainability and the Mayor’s Office of Civic Engagement and Volunteer Service, to divert much of that waste away from the landfill. At the beginning and end of the Marathon and at water stops along the way, hundreds of Waste Watchers volunteers help event-goers sort their trash, recycling, and compost into the right containers.

The result? Each year, Waste Watchers helps the Marathon divert more than nine tons of waste from the landfill. Had it been thrown away, this waste would have contributed to ground pollution and greenhouse gas emissions. Instead, it is re-purposed into recycled goods and soil amendments.

In 2015 Waste Watchers helped the Marathon reach 90 percent waste diversion, a new record and the widely-accepted definition of “zero waste.” It’s an amazing achievement, and it wouldn’t have been possible without the commitment of Philadelphians to sustainability and volunteer service.

Philadelphia’s new Director of Sustainability Christine Knapp discusses her new job, her first job, and the challenges ahead.

Q: Welcome! You’ve been on the job for a month and a half now. How has it been?

Christine: It’s been a busy and exciting seven weeks! The staff at the Office of Sustainability have been tremendously helpful in getting me up to speed on all of their work and visions for our next phase.  I’ve also gotten a lot of support and encouragement from colleagues throughout City government and from external partners, which has been wonderful.

Q: You have a mix of advocacy and government experience. How do you think that will help you in your new role?

Christine: I think having experience in both sectors helps me to understand the roles that all stakeholders can and should have in helping to meet our collective goals. I believe strongly in the ability of government to lead, but I know it has limitations. I also know the advocacy community can help to drive policy, engage new audiences and hold government accountable- all of which are critical to success.

Q: 2015 marked the end of the original timeline for the city’s comprehensive sustainability plan, Greenworks. What’s next?

Christine: Mayor Kenney is committed to continuing on the great work that has been done by the Office of Sustainability over the last eight years. Our first step will be to update Greenworks as our comprehensive sustainability framework. We want to gather feedback from the community, from issue experts and from other City agencies to create a plan that works for everyone.

Q: Philadelphia is already experiencing climate change – more extreme weather, flooding, and an increasing number of high heat days? What is the City doing from a planning perspective to deal with a changing climate?

Christine: In December, we released the City’s first climate adaptation report “Growing Stronger: Toward a Climate-Ready Philadelphia,” which details the impacts climate change could have on the city and lays out recommendations for action to mitigate those impacts. Luckily, many of our City departments are already taking actions to help adapt to a wetter and warmer climate, such as the Green City, Clean Waters green infrastructure program being implemented by Philadelphia Water, or Philadelphia Parks and Recreation piloting new forest restoration practices to identify practices suitable for our changing climate. We will be looking at how to support City departments in carrying out these recommendations, while also trying to reduce carbon emissions.

Q: We noticed a change in the department’s name – “Mayor’s” has been dropped. You’re now the Office of Sustainability. What’s that all about?

Christine: In November of 2014, voters overwhelmingly approved a ballot question to make the office permanent. That means we now stand as our own independent office outside of the Mayor’s office. This change creates an opportunity for us to work even more closely with operating departments, whose collaboration and partnership has been critical to our shared success.

Q: We know about your current job, but what was your very first job?

Christine: I worked at a bagelry on Long Island called the Bagel Nook. I’m still a bit of a bagel snob, but Philly has really stepped up its bagel game in the last few years!

Mayor Kenney announced today that the City will take part in the Standard Energy Efficiency Data (SEED) Collaborative, a free open-source database platform to track the energy performance of buildings throughout Philadelphia.

The SEED platform will help the City’s Office of Sustainability manage energy benchmarking data for nearly 2,000 commercial, municipal, and school buildings, along with 800 multi-family properties to be added to the program in the coming year.

“Philadelphia is an early leader in the benchmarking and disclosure of building energy information, and making use of the SEED platform will only improve that report,” Mayor Kenney said.  “We look forward to being an example for other cities as they look to increase sustainable energy use and limit greenhouse gas emissions.”

In cooperation with the Department of Energy, Office of Sustainability will work to integrate SEED with existing benchmarking reporting platforms, including the city’s groundbreaking data visualization tool (visualization.phillybuildingbenchmarking.com) and custom energy performance profiles emailed to every building owner that participates in the program.

“By participating in the SEED Collaborative, Philadelphia will have the opportunity to guide the development of the SEED tool and contribute toward the DOE goal of doubling American energy productivity by 2030,” said Christine Knapp, Director for the Office of Sustainability.

The city’s Greenworks sustainability plan has emphasized building efficiency as a key component of climate action; buildings account for 60 percent of the city’s carbon footprint, as compared to just 19 percent for transportation.

Today, the City of Philadelphia released its first climate adaptation report, Growing Stronger: Toward a Climate-Ready Philadelphia. An important first step toward preparing for a warmer, wetter future, the report details the impacts of climate change on municipal operations, assets, programs and policies and lays out actions that the City can take to mitigate those impacts.

“While world leaders are gathered in Paris to negotiate an international agreement, we are focused on what we can and need to do at the local level,” said Katherine Gajewski, Director of Sustainability for the City of Philadelphia. “The effects of a changing climate are already apparent in Philadelphia. We need to understand what climate change will look like on the ground and how to advance smart, proactive initiatives that will help us to prepare. Climate actions often come with a host of co-benefits that we are eager to identify and incorporate into how we make decisions and investments.”

Growing Stronger is the culmination of a multi-year planning process convened by the Mayor’s Office of Sustainability with the participation of a broad set of City departments and agencies. The report includes:

The report is available online at: http://www.phila.gov/green/pdfs/Growing%20Stronger.pdf